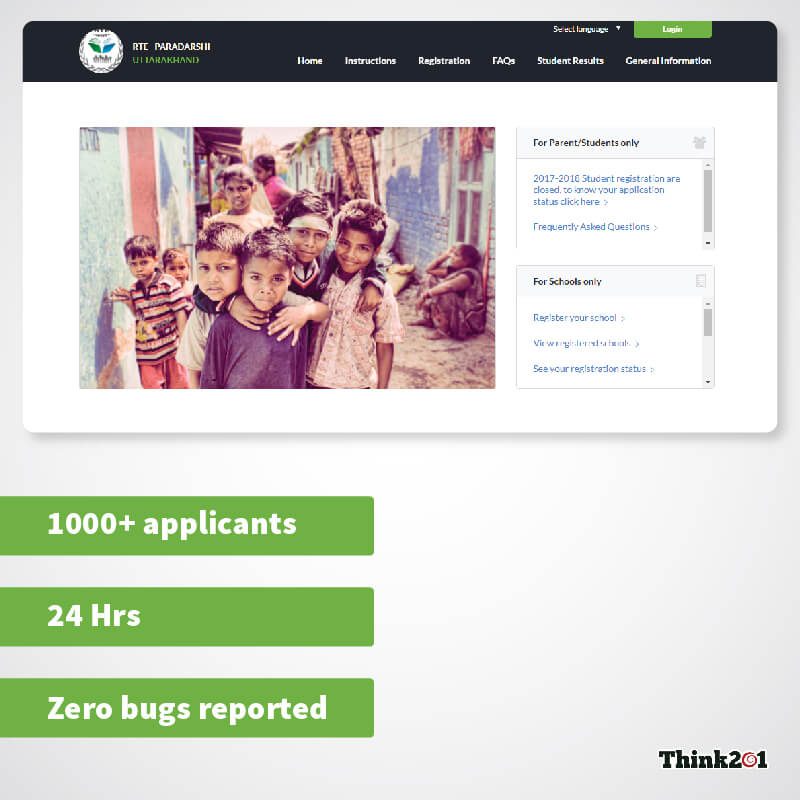 Indus Action is a non-profit organisation that has been working in the space of Policy Implementation in India since 2012. They have been working closely in the implementation of Right to Education across various States and Union Territories in India with the help of respective governments and Education Ministry.

Think201 was approached towards the end of 2017 to develop a flexible and customisable system which allows online registration of unaided private and special category schools and students belonging to economically weaker or socially disadvantaged sections of society.

In less than 4 months, we were able to deploy a system with multiple user roles such as school admins, nodal admins, district admins, and state admins to allow coordination among different stakeholders from grass-root levels to the state administrative level. We considered the inputs from the report “State of the Nation: RTE Section 12(1)(c) 2017” published by IIM Ahmedabad. Govt. of Uttarakhand has been very cooperative with Indus Action team in the implementation of the online system to amplify the impact of RTE.

After the deployment of the RTE system in Uttarakhand in the month of early April, about 600 schools onboarded themselves in the system and in 24 hours from the student registration kickstart, over 1000 students registered themselves without a hassle.

The hassle-free on-boarding of schools and students belonging to the underprivileged section in the remotest regions of Uttarakhand validates our simple and intuitive UI/UX interface designs considering the same target demography.

We feel so proud of being able to impact so many lives of the future of India by contributing to the cause through the power of technology.

Although, we, the thinkers, always try to deliver products that make a difference to the lives of the end user by the use of the product, in however minuscule or grand scale — which you can check out here.

You can read our blogs to know more about us and our process.